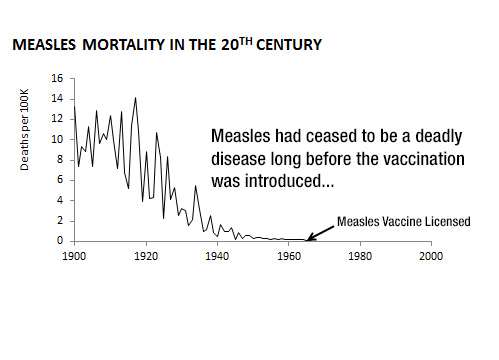 By Dan Olmsted, editor of Age of Autism

If the CDC wants to stop the spread of measles, they need to stop spreading autism. It’s nowhere near an acceptable tradeoff.

Repeat after us: Vaccines recommended by the CDC are causing the epidemic of autism and related disorders in America’s children. That is far worse than any conceivable risk from measles or any other vaccine preventable disease any American child could conceivably catch in modern day America.

That is the argument Mark Blaxill and I lay out in our new book, Vaccines 2.0, about the bloated and runaway vaccine schedule, and that is what makes the media and mainstream medicine’s obsession with the measles cases out of Disneyland downright goofy. Yes it’s also true as we’ve reported here, that the vaccine isn’t terribly effective, that vaccinated people are spreading it, that many of the cases may not even be measles, that measles as it exists in a first world country in the 21st century is not a fatal illness (see chart), that catching measles might be an immunologically useful event in a person’s life that it is dangerous to interrupt.

There are good or at least interesting arguments for all these things. But — and here is the heart of the matter — whether any of them are true, measles is not worth fighting when it is glued to a public health strategy that leads directly to the epidemic of chronic and developmental diseases now besetting us.

But this is where we have to take our stand, on first principles. It’s basic logic (I believe it’s called modus ponens, and I learned it in junior high). If the current vaccine schedule is responsible for the rise of autism and related disorders, then the conquest of such diseases as measles would need to be evaluated in that disturbing context, and not just on its own merits as standalone public health developments.

Well, in fact, (“well” and “in fact” are not part of modus ponens), the current vaccine schedule is responsible for those things, and therefore, the discussion about measles must occur in that context. And in that context, it’s not worth the price, not by a long shot.

The bottom line that needs to be emphasized is that we aren’t anti-vaccine (except for those of us who are, which is fine, they’re friends of mine and we are pleased to run their posts, but it is not the only skillful means to address the issue at hand). In my view we don’t need to end vaccination in general or the measles vaccine in particular to end the age of autism, which is our stated goal here at Age of Autism – to put ourselves out of business by putting the world right. What we are is anti autism- and autoimmune-epidemic, anti-government corruption and cover-up, anti-CDC-pharma revolving door, anti-big media as stenographic bobbleheads nodding yes and taking notes every time a weird looking Public Health Service bureaucrat with Republic of San Marco-style epaulets on their uniforms opens their mouths.

Why is it important to state and restate this? It’s important because, to reverse the modus ponens outcome, if vaccines weren’t responsible for these things — for creating and perpetuating the age of autism — few of us would be spending much attention analyzing measles or the measles vaccine. A measles vaccine or MMR that did no harm — or only the 1 in a million, so rare it’s impossible to know if it’s a vaccine adverse event fantasyland — would not be exercising most of us.

Rather, it is the overwhelmingly lopsided toll of the current vaccine schedule on Americas children that makes the MMR’s administration at age 1, as a combination live virus vaccine given on the same day as the live virus chickenpox vaccine, surrounded by the whole bloated, dangerous and untested vaccination schedule, including virus-potentiating mercury and aluminum, that makes measles at Disneyland such a Goofy distraction.

We are winning, and we will prevail, in the marketplace of ideas when the idea we champion is that the current vaccine schedule is the cause of the age of autism and that we can end that, and still prevent the rise or reoccurrence, of deadly diseases. That is not the same as ending all vaccination – though again, that is a view held by folks we respect.

I predicted Ebola would disappear quickly as a health threat in the United States (but watch out for the return of paralytic Enterovirus 68, the looming polio of the 21st century). I will also predict that if Ebola or E68 resurged, and if a vaccine were available, parents would flock to it. You wouldn’t need a mandate.

What we need to work toward, and what healthy democracies generally come around to, is more freedom and more choice, more information and more debate — not more mandates, more central planning and more suppression of dissent because it is too dangerous for the common folk to hear. Right now we are teetering on that precipice, and it is not entirely clear how things will go, which is why so many of us consider this a fight worth waging, not just for public health reasons but for the health of our political system and our world.

But that is the cost vaccine zealotry and media mindlessness. As my colleague Mark Blaxill points out, in a free market, in which reliable information drove decisions and consumer choice enabled them, nobody would pay this cost, and vaccination, like any other marketplace option, would arrive at a healthy equilibrium.

I always like to invoke the words of Jon Poling in these situations. If the media were honest they would describe him as the father of a child, Hannah, whose autistic regression after vaccination showed that the bloated vaccine schedule does in fact cause autism; and that the U.S. government – the same one that enforces the vaccine schedule! – stipulated this in court. As Jon said of Hannah in the Atlanta Journal-Constitution: “She was a healthy girl who was developing normally until she received nine vaccines (DTP, Hib, MMR, polio & varicella) on one day at 19 months of age.”

At least half of those vaccines were against diseases that were no threat to Hannah or any other American child– diphtheria, tetanus, mumps, polio and varicella – because they either aren’t circulating or aren’t worth worrying about. What would have happened if those vaccines weren’t given at all, or given later, if the MMR had been broken up and none of its components given till later? And if children were tested for possible vaccine contra-indications – like the mito anomaly the government claims might have triggered her vaccine reaction. Well, Hannah might have been one of those children for whom the risk of measles was far less than the risk of an autism-inducing vaccination.

I wrote this in 2008 when some cases of measles were leading to similar talk: “Let me tell you one reason why I’m not shy or circumspect about squarely blaming the CDC for this — because Jon Poling, Hannah’s dad, predicted something like this, or much worse, just a few week ago. And he said just what I’m saying. In the Atlanta Journal-Constitution on April 11, he wrote:

‘The current vaccine schedule, co-sponsored by the CDC and the American Academy of Pediatrics, injures a small but significant minority of children, my daughter unfortunately being one of those victims. Every day, more parents and some pediatricians reject the current vaccine schedule. In an abundance of caution, meaningful reform must be performed urgently to prevent the re-emergence of serious diseases like polio or measles.

‘As a neurologist, I have cared for those afflicted with SSPE (a rare but dreaded neurological complication of measles), paralytic polio and tetanus. If these serious vaccine-preventable diseases again become commonplace, the fault will rest solely on the shoulders of public health leaders and policymakers who have failed to heed the writing on the wall (scribbled by my 9-year old daughter).’

“Dr, Poling is the real deal,” I continued, “educated at Johns Hopkins, devoted both to his daughter and his patients, tempered by reality. He’s mild-mannered. He’s mainstream. He’s credible. To repeat for emphasis:

“He says that if a disease like measles emerges again, ‘the fault will rest solely on the shoulders of public health leaders and policymakers.’”

So we end where we began, bolstered I hope by some logic, perspective, and the neurologist-father of a child whose autistic regression after vaccination shows why measles is not the overwhelming threat we face: If the CDC wants to stop the spread of measles, they need to stop spreading autism. Otherwise, we’re going to end up with lots more of both.