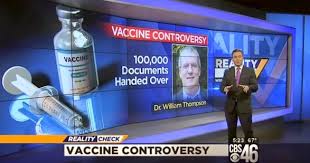 Just days ago over 100 protesters gathered outside of the Centers for Disease Control offices in Atlanta demanding transparency when it comes to vaccines.

So are these people conspiracy theorists, or did they have good reason to be there?

I promise, this is a Reality Check you won’t get anywhere else.

It is an incredibly controversial subject, but these protesters outside the CDC here in Atlanta say that the information being provided to the public about vaccines isn’t honest.

And all of it hinges on one man, a scientist you’ve probably never heard of. That scientist is named Dr. William Thompson. It was on August 27, 2014 that he made an admission that got very little media coverage. But it was a major statement.

That statement read in part, “I regret that my co-authors and I omitted statistically significant information in our 2004 article published in the journal ‘Pediatrics’.

“The omitted data suggested that African American males who received the MMR (mumps, measles and rubella) vaccine before age 36 months were at increased risk for autism. Decisions were made regarding the findings of the report as the data was collected and I believe that the final study protocol was not followed.”

[RELATED: Protesters to ‘Rally for Truth’ about Vaccines at CDC Headquarters]

I will explain the significance of that statement in a minute. But let’s be clear: Thompson did not come forward on his own. He released his statement only after he was secretly recorded by Dr. Brian Hooker.

Once that happened, he hired a whistleblower attorney and turned over documents to Congress.

Thompson still works for the CDC, and a few weeks ago, I requested a sit-down interview with him. Thompson refused that request.

Even though he wouldn’t sit down with me, Thompson has claimed that he has handed documents about this case to Congressman Bill Posey’s office.

I spoke with the congressman’s office about that, and a spokesperson confirms that thousands of documents were handed over.

Sources within that office say as many as 100,000 documents were turned over. Congressman Posey brought this information to the floor of Congress and what he read there was stunning—that authors of the study not only hid the actual findings, but also attempted to destroy evidence. Quoting from Thompson, “The authors of the study decided not to disclose to the public that African American boys under two were more susceptible to developing autism or autism-like symptoms from the MMR vaccine.

“The remaining four coauthors all met and brought a big garbage can into the meeting room and reviewed and went through all the hard copy documents that we thought we should discard and put them in a huge garbage can. However because I thought it was illegal and would violate La Jolla and DOJ requests, I kept hard copies in my office and retained all associated computer files. I believe that we intentionally withheld controversial findings from the final draft of the pediatrics paper.”

So in case you missed it there, Thompson, a CDC scientist and an author of the study in the journal Pediatrics that insisted that there was no link between vaccines and autism, admits that he and the other authors of that study left out information that was deemed controversial—information that in some African American male children, who are given the MMR vaccine before the age of two, did have an increased risk of autism and signs of autism.

And that not only did the CDC hide that information, but that the authors of the study threw that evidence into a trash can and destroyed it.

There is so much hysteria over this subject. Why is it that a person has to be for all vaccines given in all quantities at all times to all people, or a person is anti-vaccination? Vaccines have probably saved more lives on this planet than any other single medical advancement. You might know that.

But what you might not know is that all vaccines in all quantities for all people are not safe. Every year hundreds of children are injured by vaccines, and since 1986 the United States Government has paid out $3 billion to the vaccine injury compensation program.

Raise even one question about why that is, and you’ll get pushback. Send yours to us on Twitter @BenSwann_