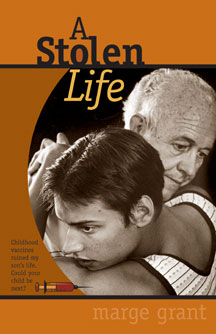 “A Stolen Life,” by the late Marge Grant, provides a mother’s search for the cause of her son Scott’s mental and physical disabilities after being vaccinated.

Scott, as an infant in 1961, suffered irreversible brain injury. Marge and Jim Grant’s search for answers led to the Mayo Clinic where doctors diagnosed that the diphtheria-pertussis (whooping cough)-tetanus (DPT) shot injured their son. This diagnosis would require 24/7 care for the rest of his life.

Scott, who entered the world of a life-long, non-ambulatory, spastic quadriplegic, posed immense challenges for the Grant family which included Shawn, his older brother. Despite daily schedules, Marge pioneered the U.S. vaccination safety information movement with an appearance on the Phil Donahue Show.

She seemed most proud of founding Wisconsin’s parent organization, Determined Parents To Stop Hurting Our Tots (DPT-SHOT). She was instrumental in changing Wisconsin’s law to allow parents freedom to choose whether or not to have their children vaccinated before entering school. Federal officials valued her expert testimony in forty appearances before the U.S. Congress. She served on the National Academy of Science, Institute of Medicine’s Vaccine safety Forum. She, also served on the Advisory Commission on Childhood Vaccines, representing children who suffered vaccine-related injuries or death.

In the book’s Foreword, Kristine Severyn, R.Ph., Ph.D. states, “As young parents, Jim and Marge Grant, like most American parents, once believed what they were told by doctors arid public health authorities. Sadly, they and countless other families learned the hard way. One can only hope that this book prompts the public to research vaccines, question their doctors and be skeptical of medical advice.”

IVAC is grateful for donated copies of “A Stolen Life” which will spread vaccination truth. This 172-page paperback (p006) is available from IVAC for $20.00 (includes shipping)